I’m from Western Sydney. As I’m writing this, there are four days left until Ramadan and I relish the coming nights in the following month. Despite my Latin American Catholic upbringing, I’ve been surrounded by friends who are Muslims of varying degrees of piety. This month heralds a feast with the setting of every sun. Our diversity gives way to food from all over the world during this time. People are maybe familiar with the iftaar fare of some of the larger older communities such as that of Lebanese or Turkish Australians, but I will try and shed some insight into the lesser known foods of other communities. 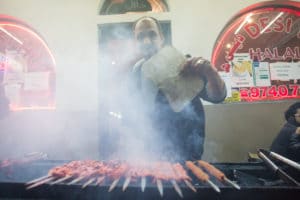 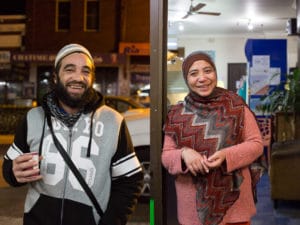 Fasting whilst the sun is out is a requirement for all observant Muslims unless there are medical reasons why they cannot. This includes abstinence from water for the same time period. It is after the sun sets, that every person and family will break their fast at what is commonly known as an iftaar. Following the evening prayer, iftaars are grand affairs – enormous feasts meant to nourish the worshipper after a day’s worth of fasting and prayer.

Amongst Bengalis, Indians and Pakistanis, the centrepiece of any iftaar is a biryani or pulao – a large rice dish. The two are similar in their content, consisting of rice and meat or vegetables cooked in spices. The difference lies in their composition. The rice for pulao is prepared in a lightly seasoned broth, as opposed to just water, and the meat is usually placed simply onto the rice. Biriyani is generally held to be a more complex; Biriyani exists in layers and the meat and vegetables used are cooked separately over a longer time to make everything more tender. Another distinction also lies in the fact that biriyani is usually conceived as a main course type meal, and served on its own, but pulao can be an accompaniment to other dishes. 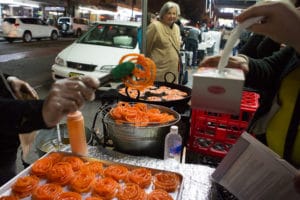 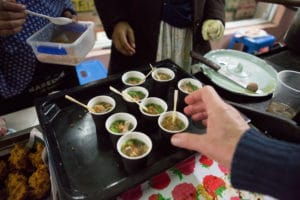 Another dish of important significance for South Asian Muslims is haleem, a stew consisting primarily of lentils and meat. First, a korma, a sort of spiced meat gravy, is prepared as the pulses soak. Once everything is ready to be cooked, it is then mixed together and blended until it takes on a soft paste-like consistency. Haleem shows many variations depending on where it is prepared. In Sydney, Bengali haleem is the most popular, but the variants from India and Pakistan can also be found.

The iftaar for Indonesian people is opened with the consumption of a sweet snack called takjil. Takjil celebrates the Indonesian penchant for sweet foods and the uniqueness of their desserts. In Indonesia, as well as our Indonesian diaspora community in Sydney, these desserts can also be found year round. But it’s during Ramadan after sunset that they are at their best. Es Cendol is perhaps the most well known of these. In a bowl or glass – palm sugar is cooked down to a warm, velvety sweet syrup called gula jawa. Coconut milk is then layered on top, followed by the addition of a cascade of sweet strands of pandan flavoured rice flour jelly and a small summit of shaved ice. At this point some people consume cendol as is or with the addition of sweetened red beans, durian, or pieces of dried jackfruit. 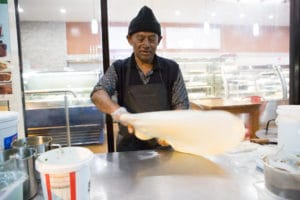 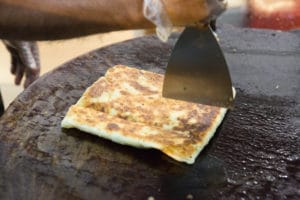 After takjil, the usual iftaar meal will take place. Indonesians will have a varied table consisting of curries, stews, stir fries and rice. Rendang is a slow cooked, caramelised beef curry from Sumatra. Lemongrass, coconut milk, onions and garlic form the base of the stew. The flavouring comes from a spice mix called pemasak which varies from person to person or family to family. After hours of cooking, the coconut milk reduces into a thick gravy, brimming with flavour. This is then served with sambal, a sauce consisting of shrimp paste, chillies and garlic, rice and kerupuk, a rice cracker which functions as both a common accompaniment and a snack on its own.

If you’re reading this and thinking of trying some of the fare I’ve mentioned here, as well as the ones I’ve missed, there’s not a better time to do so. Ramadan is a time where Australian Muslims across the country long to express their hospitality and share their food with everybody.