Marvellous Merrylands is a Sydney gem

Merrylands is another one of those Sydney suburbs that is brimming with cultural diversity. If the flavour of Fairfield is somewhere between Iraq, Latin America, and Southeast Asia, then Merrylands (only a short drive north) highlights the tastes of Iran, Afghanistan, and Turkey.

Merrylands is this kind of paradox: somewhere not too far away that boasts restaurants, bakeries and speciality stores from places on the other side of the equator. What makes Merrylands stand out amongst the other similar Western Sydney enclaves is the fact that it showcases the food, culture, and language of some of the newest Australians. This article will not do justice to the entire neighbourhood and its amazing denizens; rather it will serve to shine a spotlight on some of the best businesses in the area.

Persian-speakers represent a significant amount of the cultural influence in the area. Restaurants run and managed by people from Iran, Afghanistan, and to a small extent, Tajikistan, serve up some of the most authentic Iranian and Afghan food. The unique aspect of Merrylands in this regard is that all the food here is neither fast food style nor haute cuisine. Instead it is very homey comfort food. It’s what-your-grandmother-makes-when-you-visit style food.

A place in Merrylands that never fails to to impress is the Green Wheat Bakery. It’s on Miller Street, adjoining Merrylands Road. A small bakery, run by a Hazara family originally from Afghanistan, Green Wheat makes fantastic nān. Nān is made with courser flour than what we’re used to. It gives the bread a beautiful and rustic feel. It is flattened out and scored lengthways to add another dimension of texture. Another benefit to this is that when the nānis used to mop up sauces or stews or soups, the liquid fills those long grooves perfectly. Nigella or sesame seeds can also be added to the bread while it bakes, infusing some toasty, nutty tones. The nān itself has a slightly chewy texture and a remotely crisp exterior. The fresher it is, the better. It has an indescribable and rare flavour when it’s fresh out of the oven. Green Wheat tends to bake through the morning, but as with everything, the earlier you get there, the better. Just follow the smell of baking bread and clay ovens. 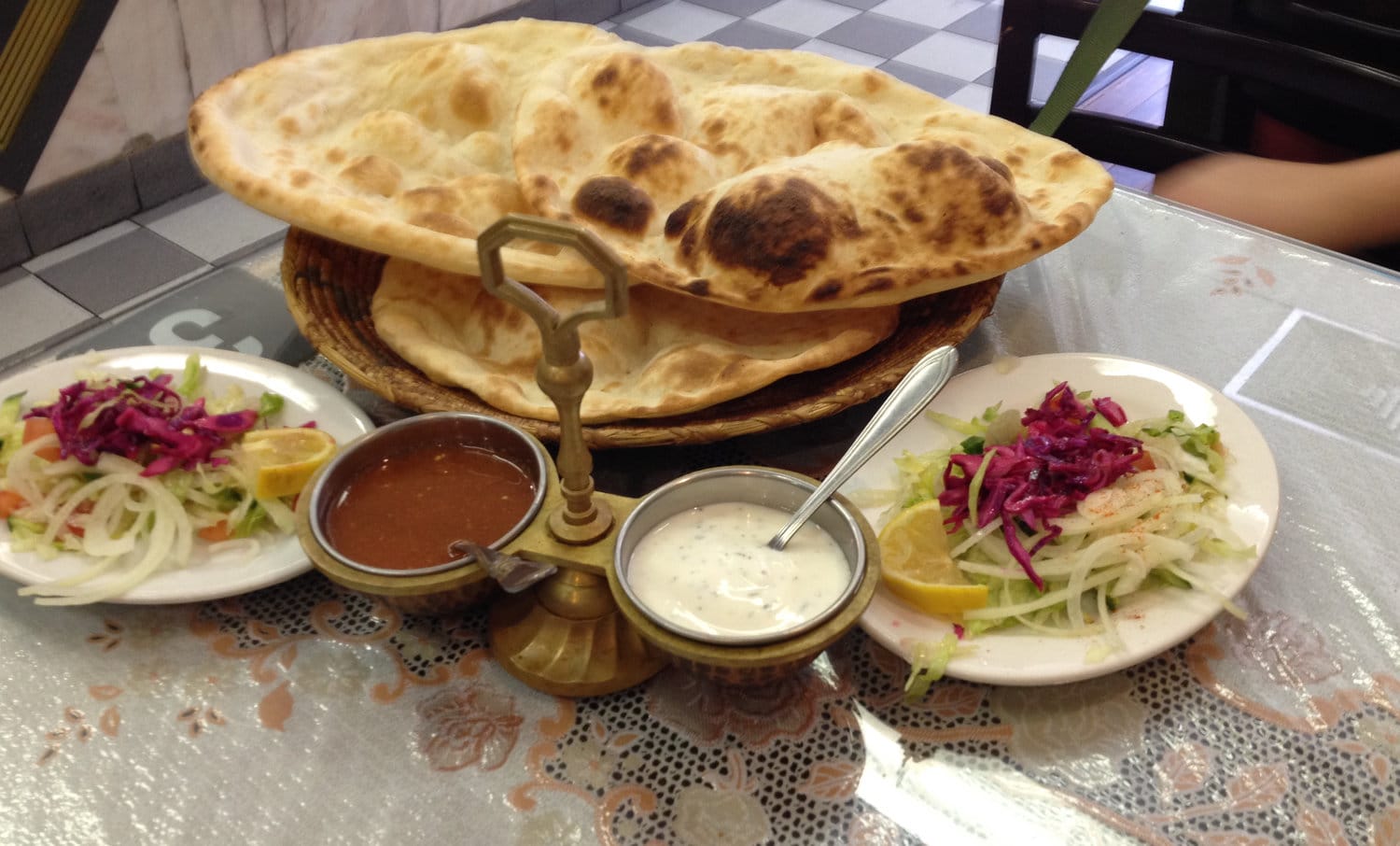 Saffron Restaurant, at the top end of Merrylands Road, is a recently opened restaurant that has gained a lot of favour with Persian-speaking locals. And with good cause. You can hardly go wrong with anything you order here, because everything is spectacular. If you want something really traditional, go with one of the stews, especially ghormeh sabzi orgheimeh. Ghormeh sabzi, which in Persian means ‘green stew’, uses a garden’s worth of fresh and dried herbs: Persian dried limes, coriander, parsley, leeks and fenugreek and beans, (usually red kidney beans) and a piece of beef or lamb seasoned with tumeric. Ghormeh sabztakes many diverse elements and prepares them in such a way that the flavours play off of each other in a very unique way. The slow cooking process allows the herbs to elicit a darker and fuller taste in the dish. With each spoonful you can taste the different herbs simultaneously together and one by one. The addition of the dried lime provides a mellow citrus highlight that is not tart. The beans are cooked perfectly and add a more substantial texture to the dish. Ghormeh sabzi at Saffron is best eaten with rice. Gheimeh is another stew based more around meat. Meat becomes an essential part of the dish, slow cooked with split peas, tomatoes, onions, and a small amount of spices and seasonings, as well as dried lime. The stew is cooked until the meat is tender and the split peas absorb the flavour of the broth. The most unique aspect of gheimeh is the garnish of thinly sliced and fried potatoes, very similar to French friends. This addition completes the dish. There are three types of savouriness – that of the slowly cooked meat, the split peas and the potatoes. These ingredients also provide three textures. There is the firmness of the meat, the delicateness of the split peas, and the crunch of the potato garnish. Gheimeh is a hugely satisfying and delicious dish. I’ve eaten Persian stews in a lot of places around Sydney, but fail to find ones as well prepared as the ones at Saffron Restaurant. 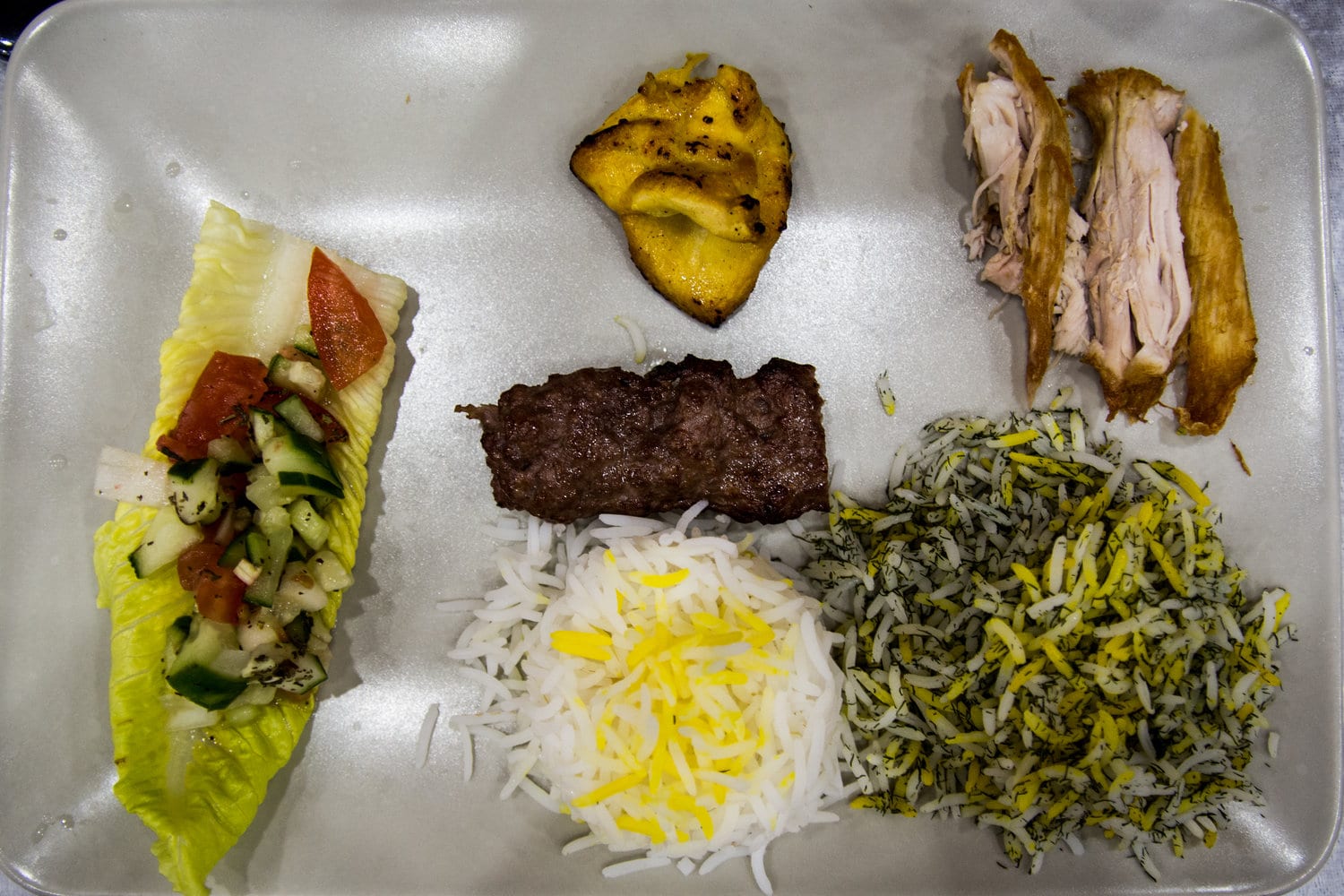 Kabul House is a Merrylands institution. Yes, there were other Afghan restaurants before it in Sydney, but Kabul House is prolific for popularising Afghan cooking in Western Sydney. I personally have eaten there more times than I can count. Kabul House and its traditional home cooked Afghan food completed changed the definition of local favourite. The one dish I can never refrain from ordering at Kabul House is the mantu. Mantu are the original dumplings. They are believed to be the ancestor of modern Italian ravioli and a Chinese bun called Man Tou (馒头). The filling is a rich spiced lamb mince with onions, meticulously wrapped into a dumpling skin. The mantu are then plated with a thick garlic yoghurt sauce called seer moss and cooked lentils or split peas. The traditional condiments are a thin, slightly vinegary tomato sauce and more seer moss. To eat mantu that’s prepared so well is an experience in and of itself. First, the combination of the tomato and the seer moss, the tart pepperiness is countered by the richness of the seer moss. The filling is a melange of spices, having a fragrance lined with cumin, turmeric and other spices, and the warmth of the meat  — it makes for an incredible experience for your tastebuds! The mantu at Kabul House are a must-have if you’re in Merrylands. 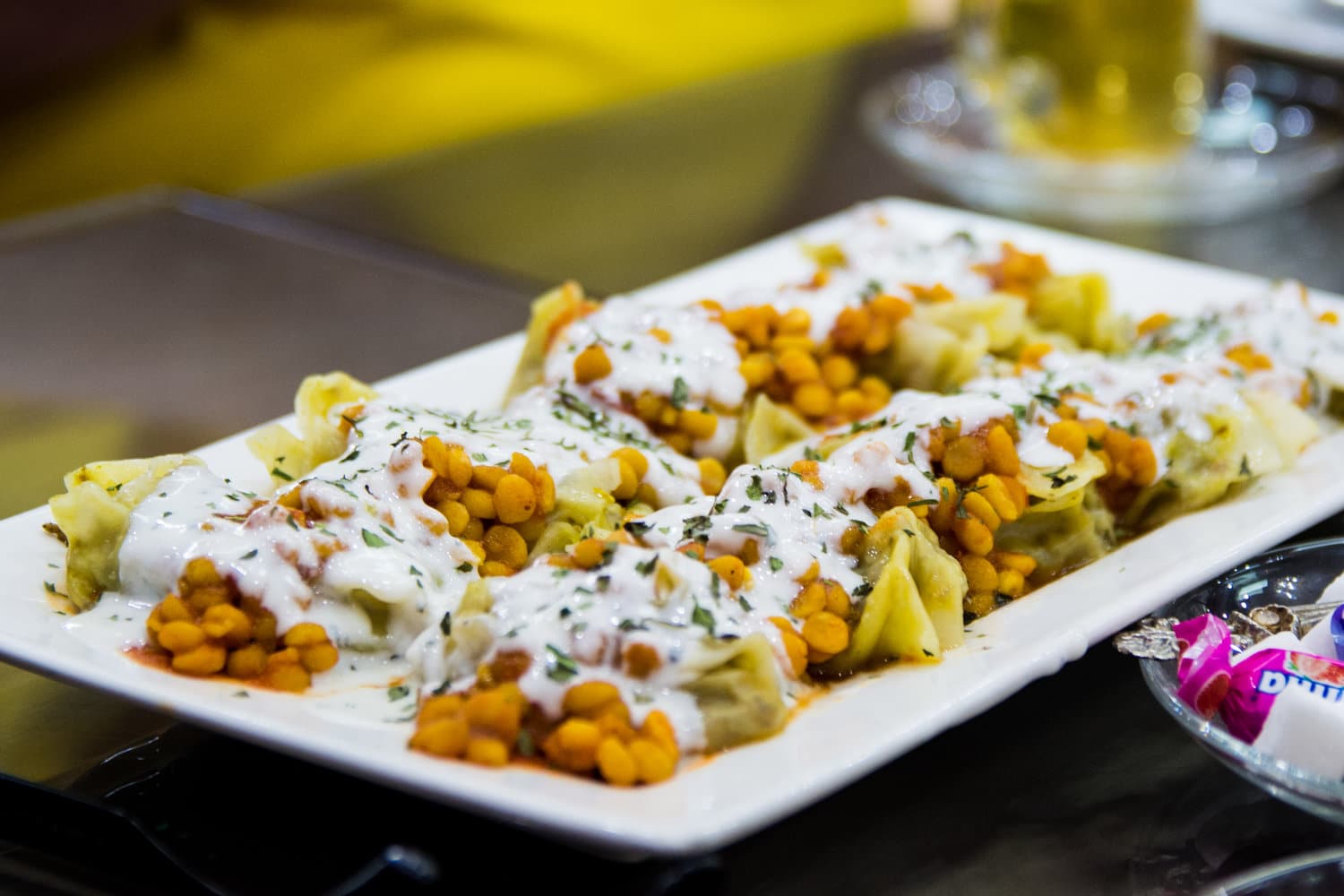 If you’re looking for a more traditional drink, make you order a pot of Afghan tea. It’s a strong black tea with cardamom pods thrown in. The cardamom infusion adds a spice sweetness! 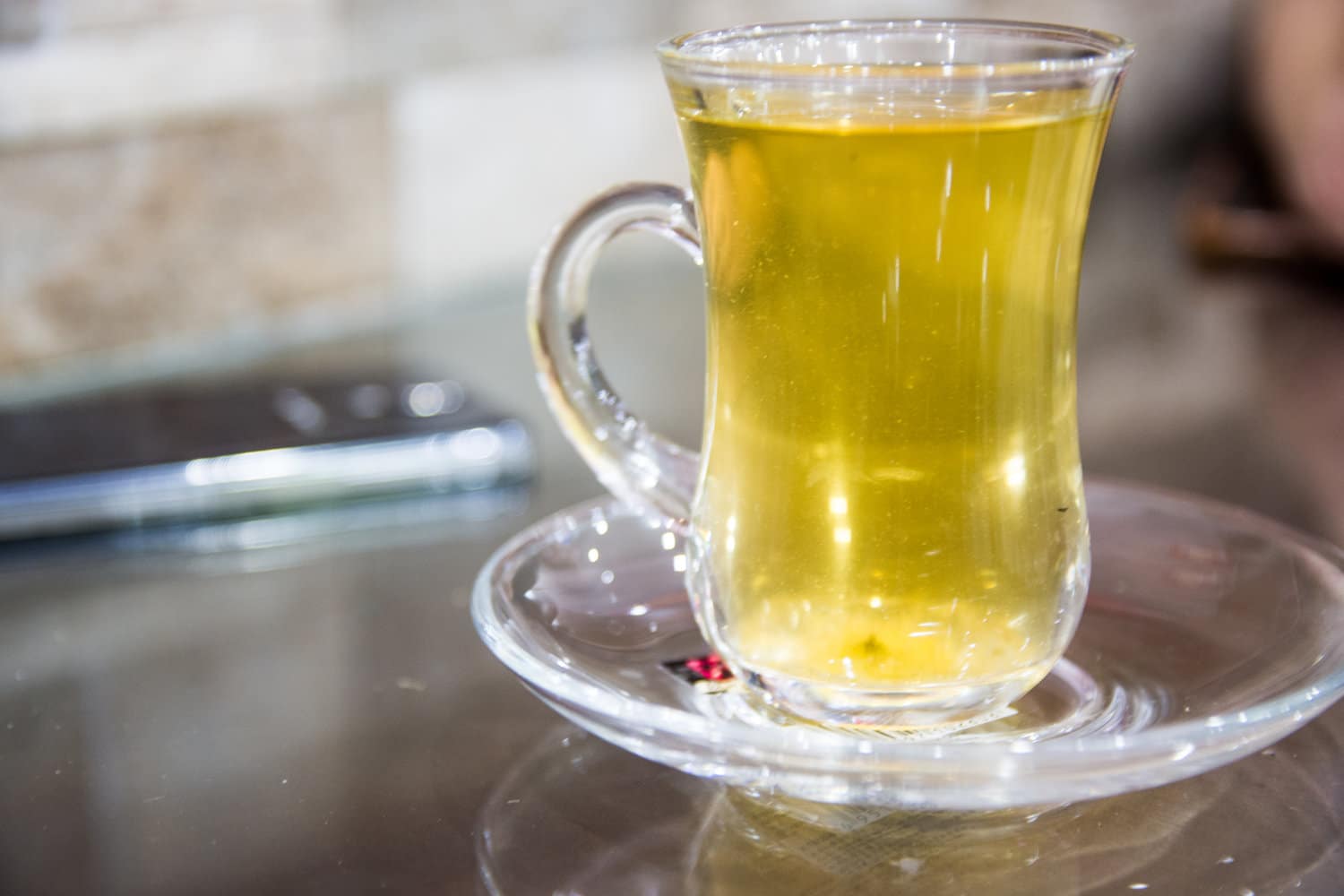 Dessert in Merrylands is a big deal. Sweets in general punctuate the day in Iran and Afghanistan and it’s a tradition that’s been brought over by some of our newest migrants, along with traditional sweets to eat. Asal Sweets is a business that has been honing its skills in Tehran for 25 years. Asal specialises in making traditional Iranian biscuits as well as cream and layer cakes. Biscuits in Iran hold a treasured place in society and have been an integral part of life for a very long time. Iran’s tea culture is indisputable. Accordingly, biscuits and sweets are ever-present fixtures in Iranian homes. Highly recommended are the soltan, a delicate and slightly crumbly biscuit made with saffron and studded with sultanas. Nan berenji (rice flour cookies) are my favourite. In addition to the rice flour, these cookies are made with saffron and rose water. Biting into a nan berenji, you are greeted with the sweet floral taste of the water and a sweetened sugary saffron flavour. 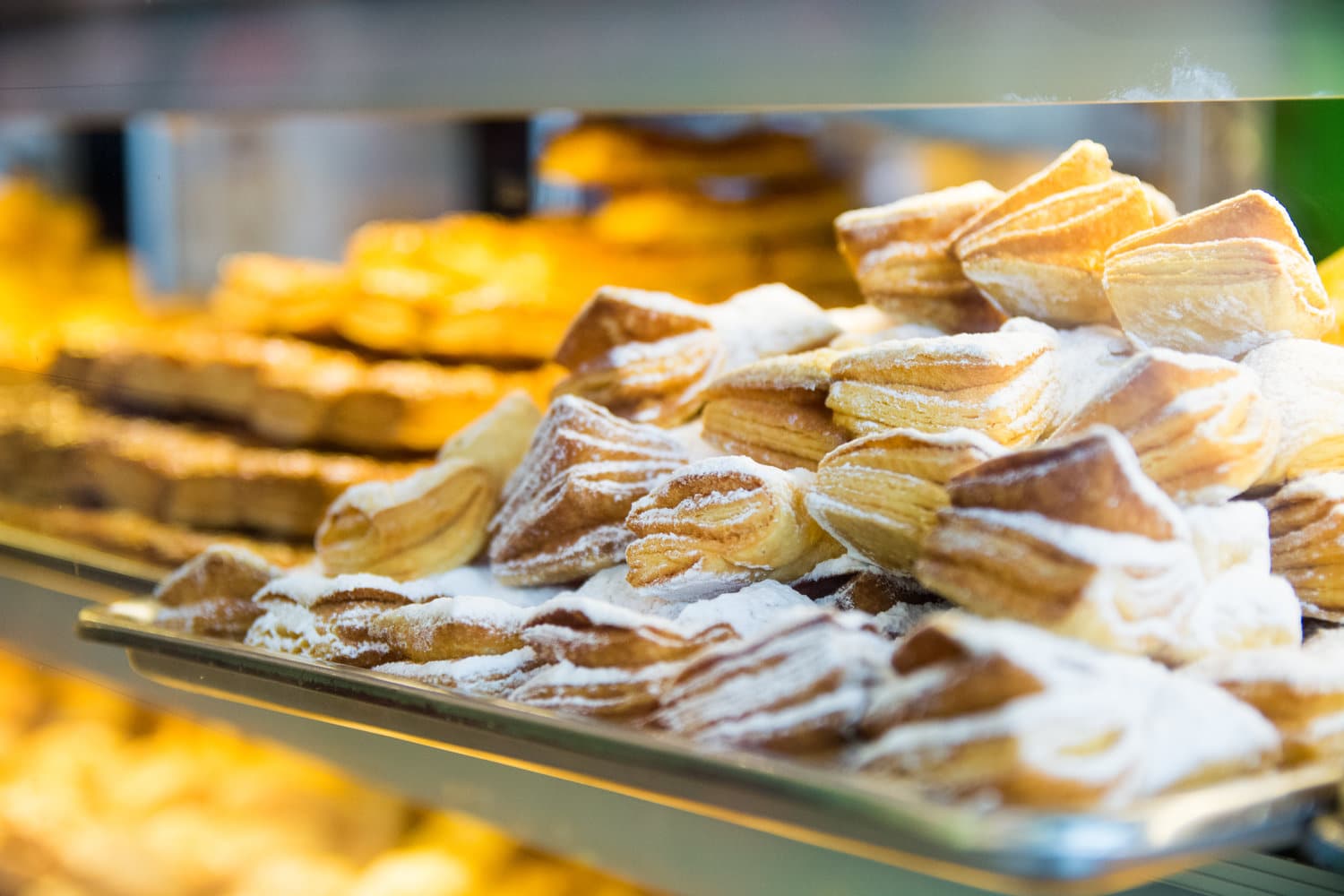 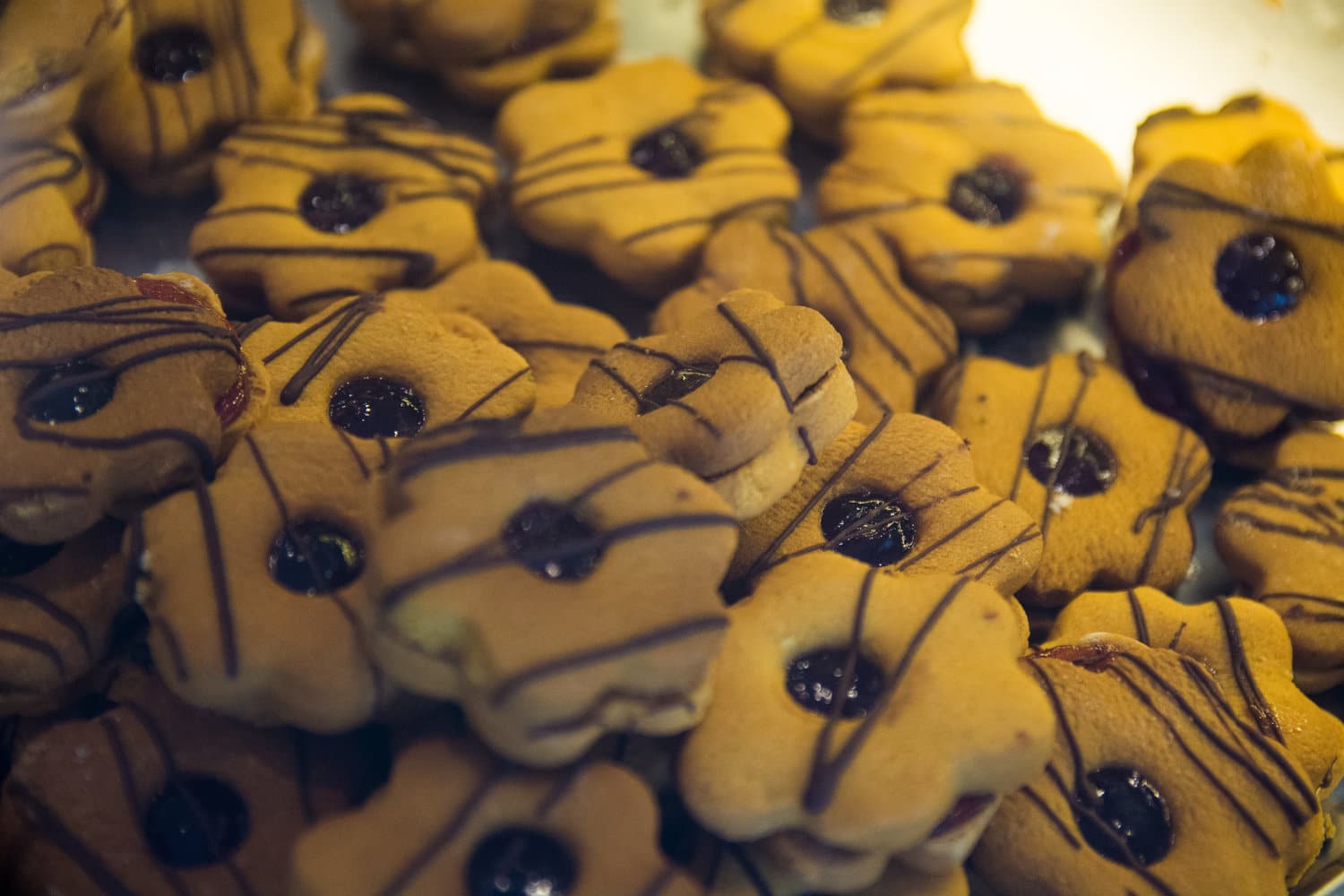 If cold desserts are more your thing, take a quick walk over to Shiraz Ice Cream. They are masters of making Persian ice cream or bastani sonnati. Persian ice cream is somewhere between gelato and regular ice cream. At Shiraz, they have a very dense and wicked chocolate ice cream, but if you want something altogether new and delicious, try the saffron ice cream. You’ll notice it immediately, with its bright golden yellow colouring and bits of pistachio strewn throughout its cream centre. The taste is hard to express in words, but it’s a kind of sweet and spiced creaminess, followed by crunchy pistachios. If you need something dairy-free, Shiraz also makes the traditional Persian chilled snack called faloodeh. Faloodeh is a base of cold rose water slush, mixed with frozen vermicelli noodles. This can be topped with a syrup of sour cherries or lime. Summer in Sydney is the perfect time to try it! 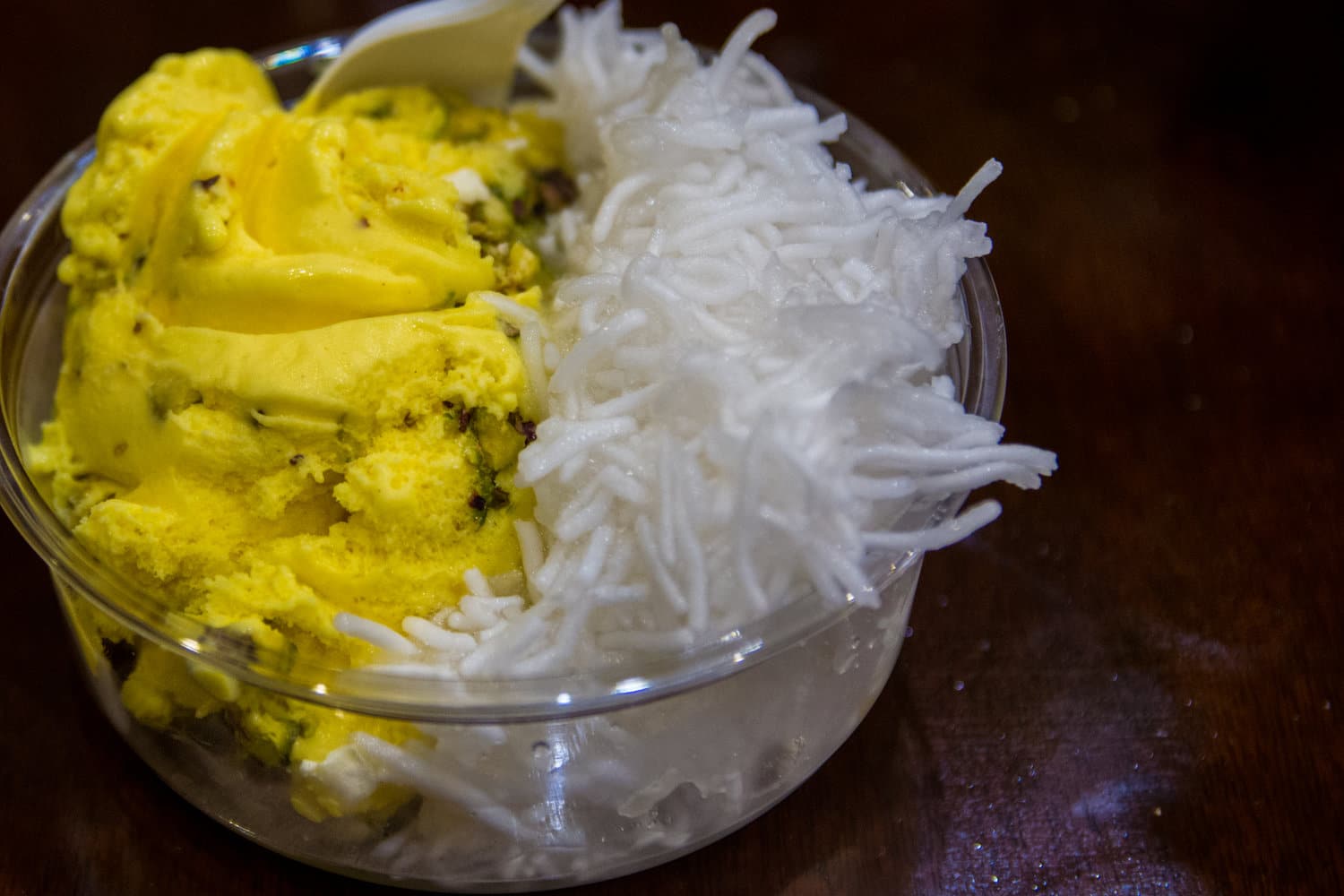 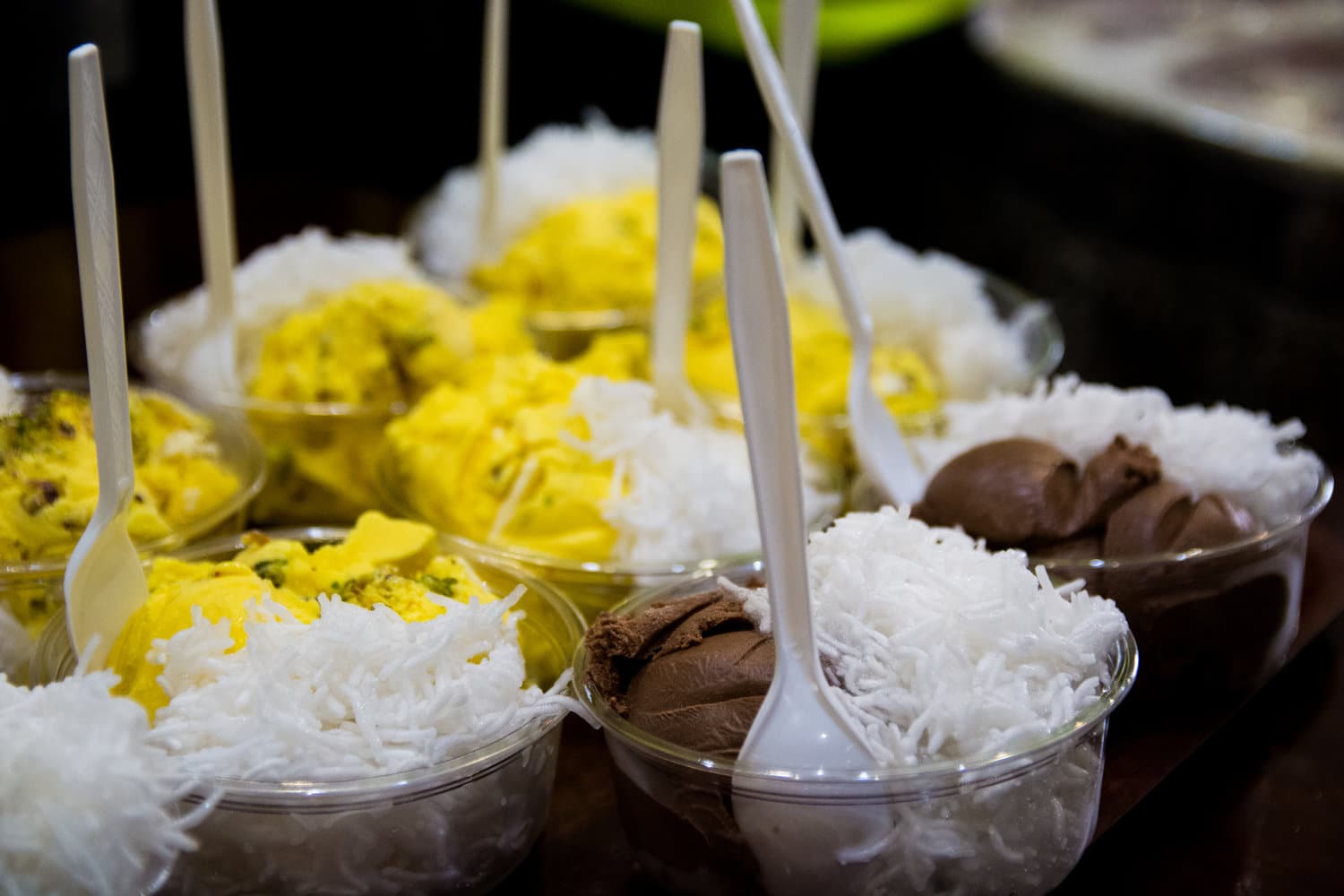