By: Lovely Lesley, our CEO and Senior Taste Tour Guide

I love food tours! It’s such a great way of seeing a city, finding some hidden locations, meeting locals, and getting that true insider knowledge. A food tour always tells the stories that you can’t get from guide books, and I always find them to be better than your standard tourist tour. 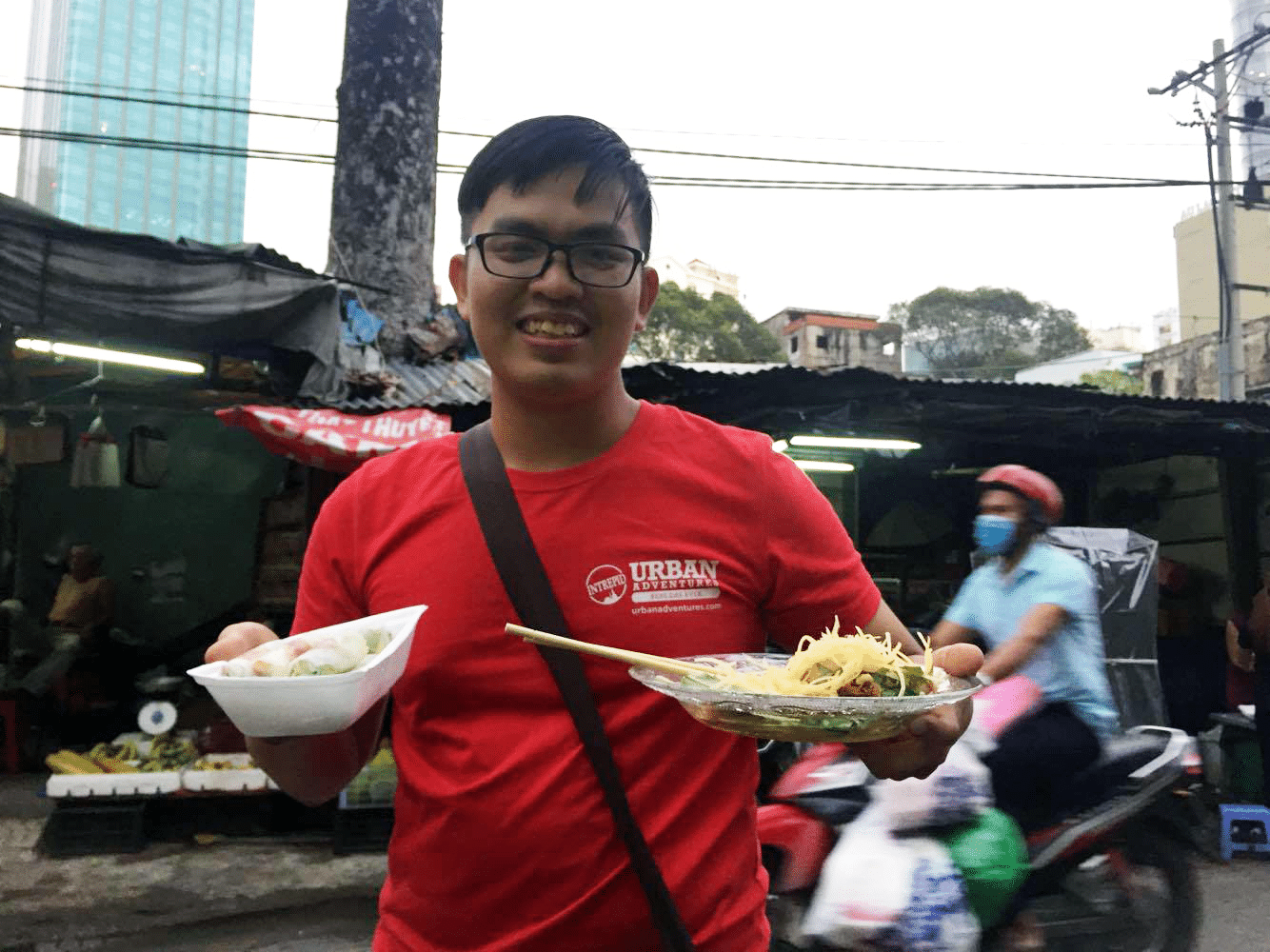 At Taste Tours we have partnered with Intrepid Urban Adventures, as one of their “In Focus” (or social enterprise) partners. We are very pleased and proud to be associated with the Intrepid brand as it has been a brand that has strong ethics around sustainability and building local economies. All their tours are offered by local partner businesses.

So here I am in Vietnam, and I wanted to combine my love of food tours and support one of our Urban Adventures partners. It was a great excuse to go on an evening Saigon Street Food Tour in Ho Chi Minh city, along with my friend Lori.

Ho Chi Minh city is a fast-developing city, very different to the place I visited ten years ago, before the chains and brands arrived. But this food tour took us to the old street markets.

We met our guide Fu (or Phuoc who said, “Call me Fu as my full name sounds rude in English”) along with seven other Australians. 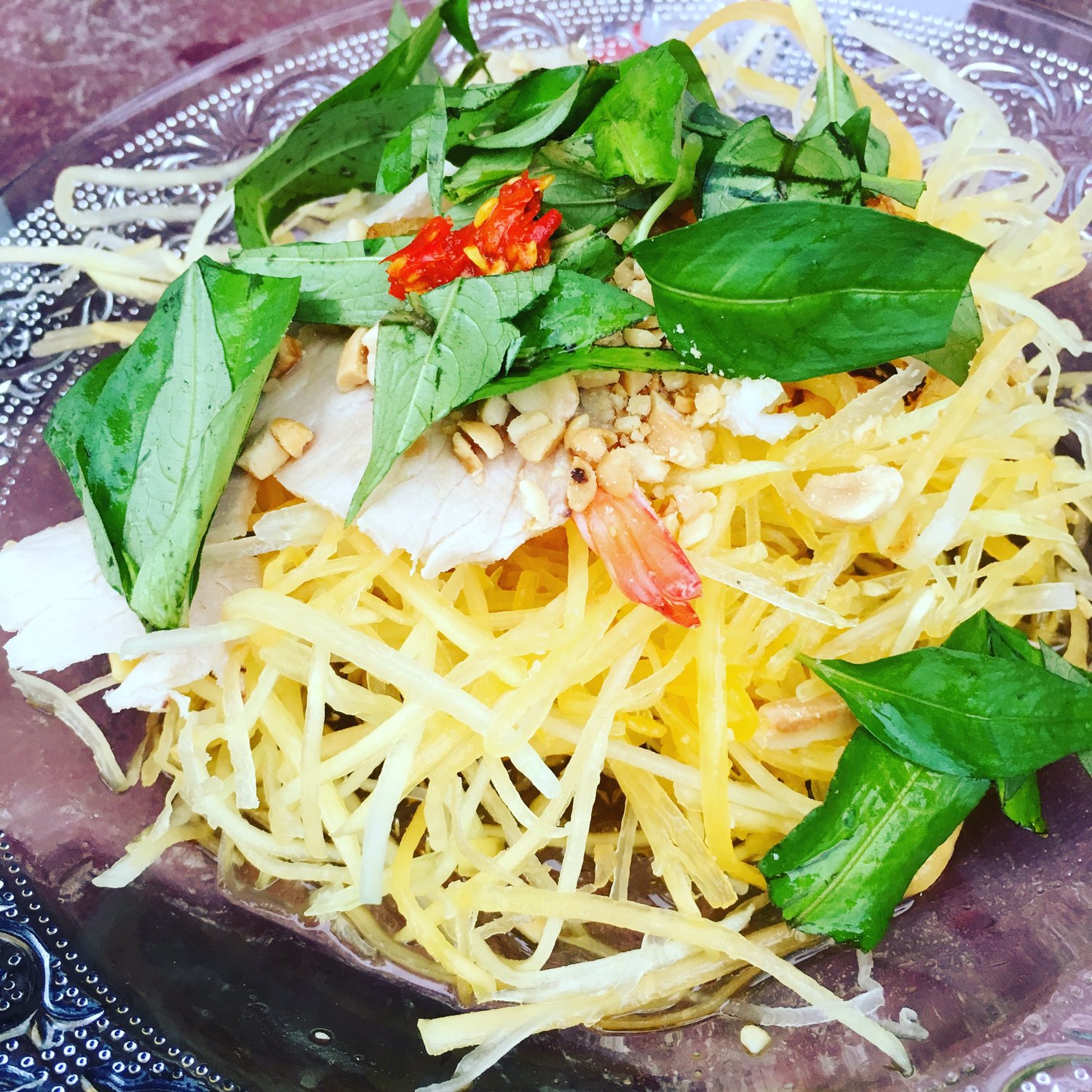 What did we try? It was a series of delicious morsels. Up first: papaya salad! Who knew that there is a Vietnamese version of pawpaw salad! I have tried the Lao (hot, fishy, crabby) and Thai (hot and sweet) versions, and now for the trifecta, the Vietnamese salad.  It might be the gentlest version of paw paw salad, except for those crunchy pig’s ears. With lovely mint and prawn and fish sauce and chilli, it was very tasty and paired with yummy rice paper rolls. Then we had “broken rice” –  the rejected portion of the rice crops. “Broken rice” was once the domain of the peasants and is now the higher priced rice. Our broken rice was served with beautiful marinated pork chops. 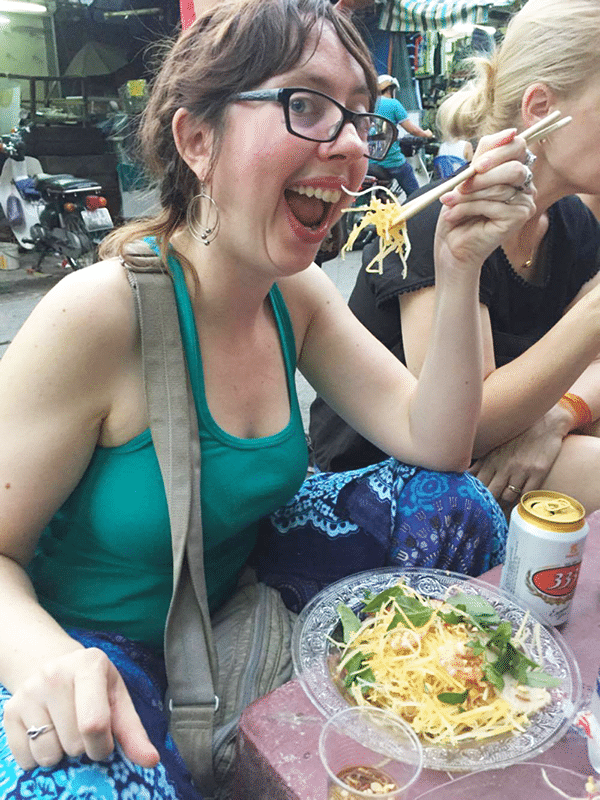 We also stopped for some sugar cane juice, just like on our Cabramatta tour. You really can’t beat it on a hot and humid Ho Chi Minh night. It’s not as sweet as you would think, and it’s freshly squeezed. 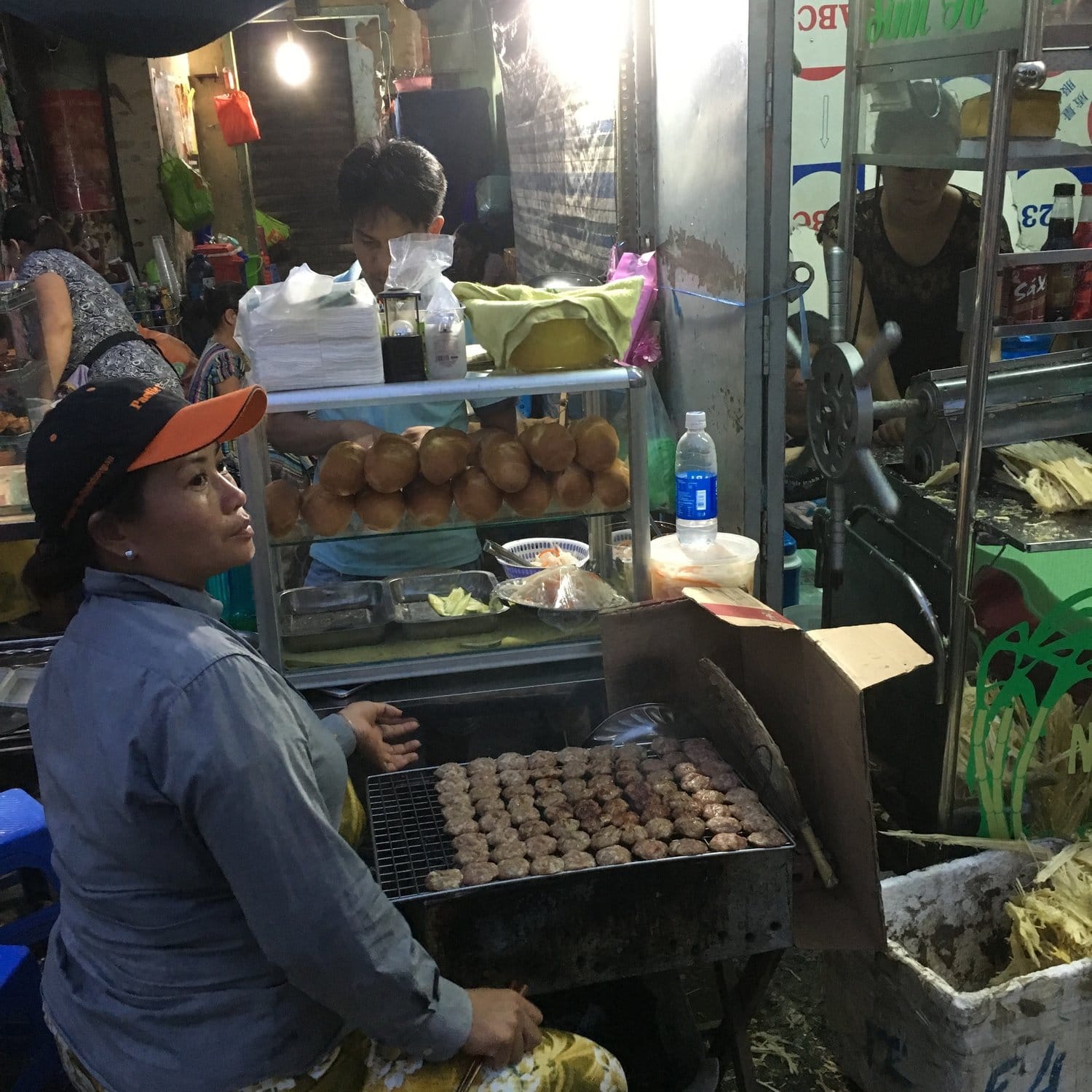 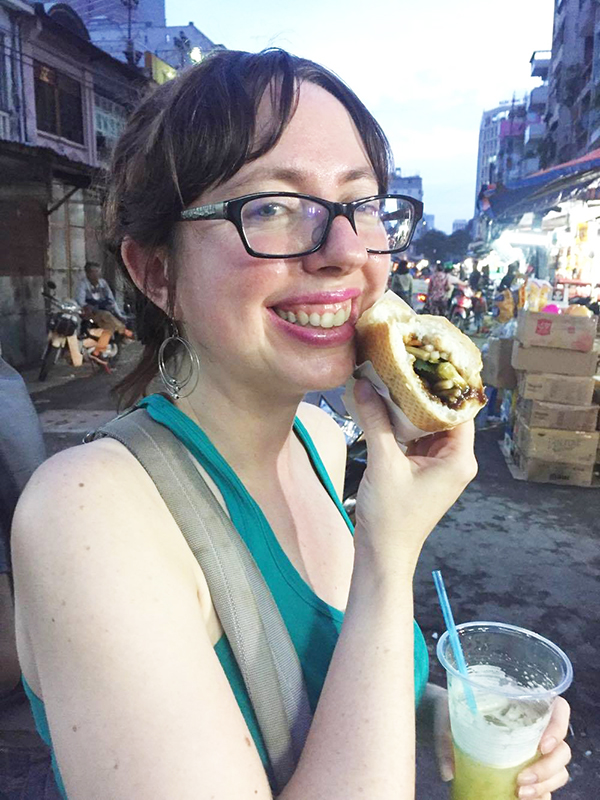 Up next was Banh Mi with a difference, featuring delicious pork rissoles. Apparently this kind of Banh Mi can be much harder to track down in Ho Chi Minh City. The rissoles are all cooked by hand over a tiny portable BBQ fire with more dedication to the craft than you would see in any kitchen. 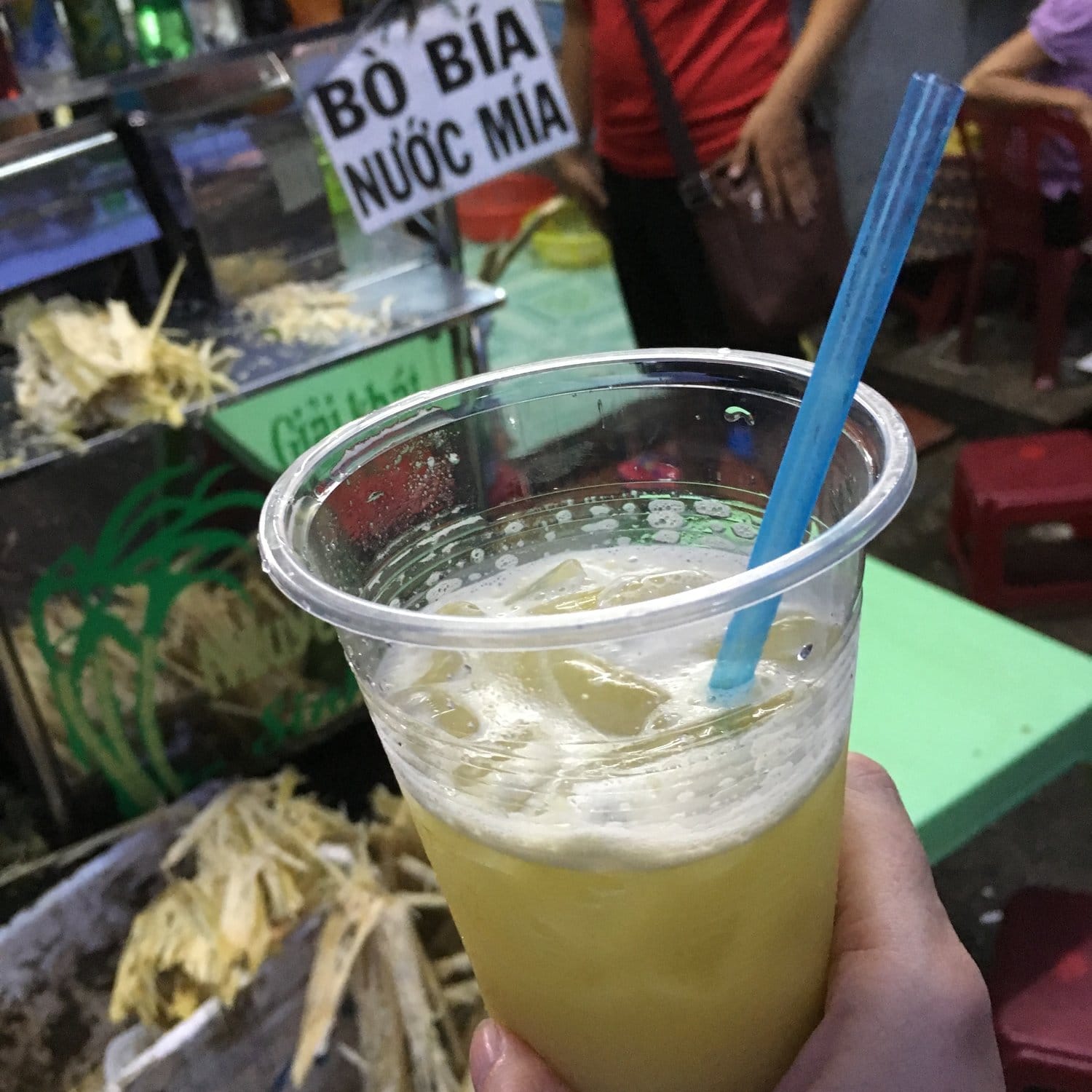 So far, there’s been nothing too confronting on the tour.

But then it’s time for the two-week-old fertilised duck egg and the Aussies all fell apart, much to the guide’s amusement. “It’s an everyday delicacy”, Fu says. Logically, it’s really not muchdifferent from eating chicken or egg, but our internal reactions are conditioned and strong. So, Fu’s tour demonstration was to eat the egg! I had to try it. It was a chance to overcome the internal conditioned reaction. No one else tried it. I survived and can confirm it just tasted like chicken and egg, rather ordinary.

Finally, a sticky rice treat and a yummy coffee seal the deal. The coffee shop was a well-hidden café down an alley and up four flights of stairs, in an old apartment block which has been taken over by pop-ups making designer clothes, or serving great drinks and food. This is a really recycled place waiting its turn to be replaced by concrete and glass. It was a place we would never ever find on our own. We hear about Fu’s great ambitions to do a Masters in Linguistics in Australia and I hope he makes it! 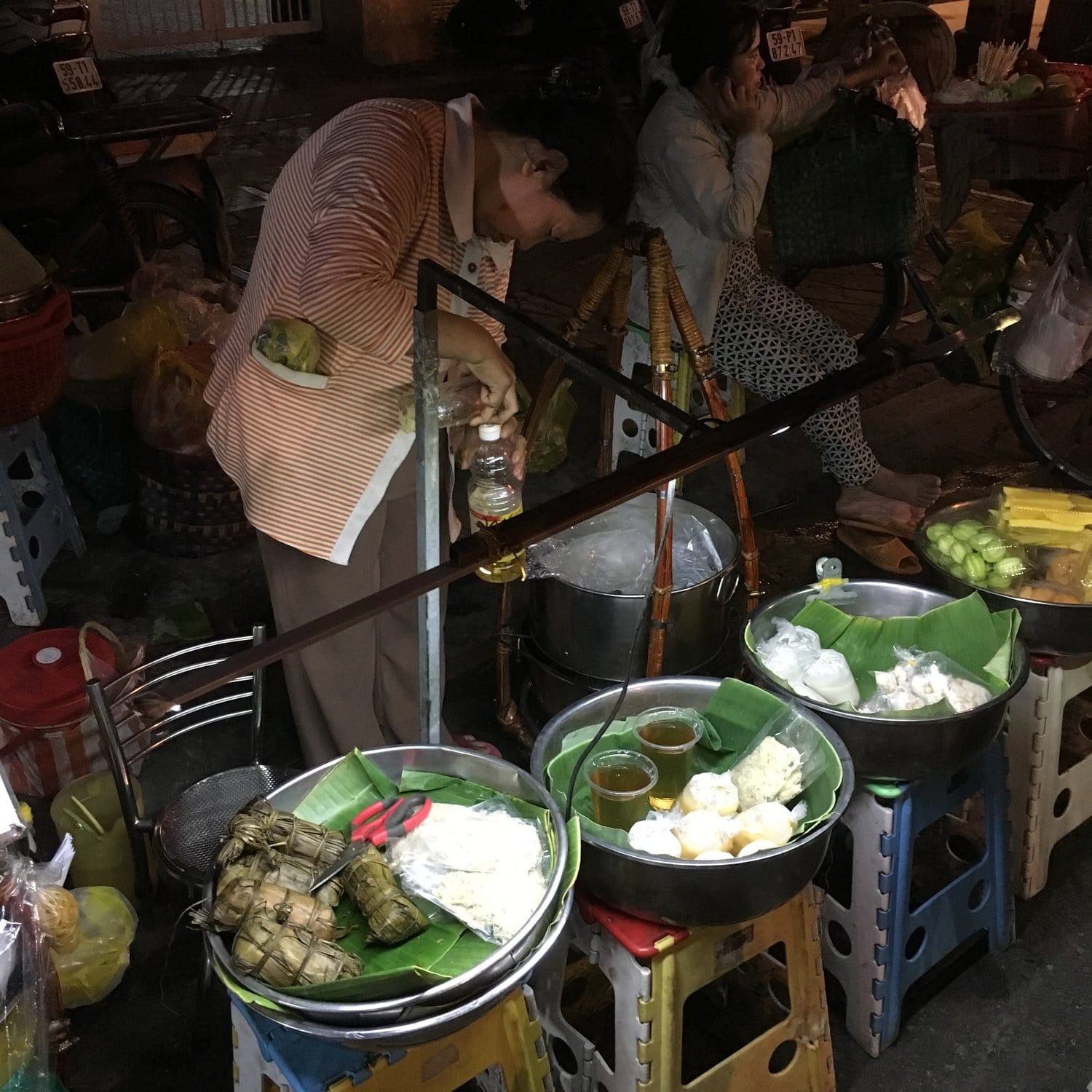 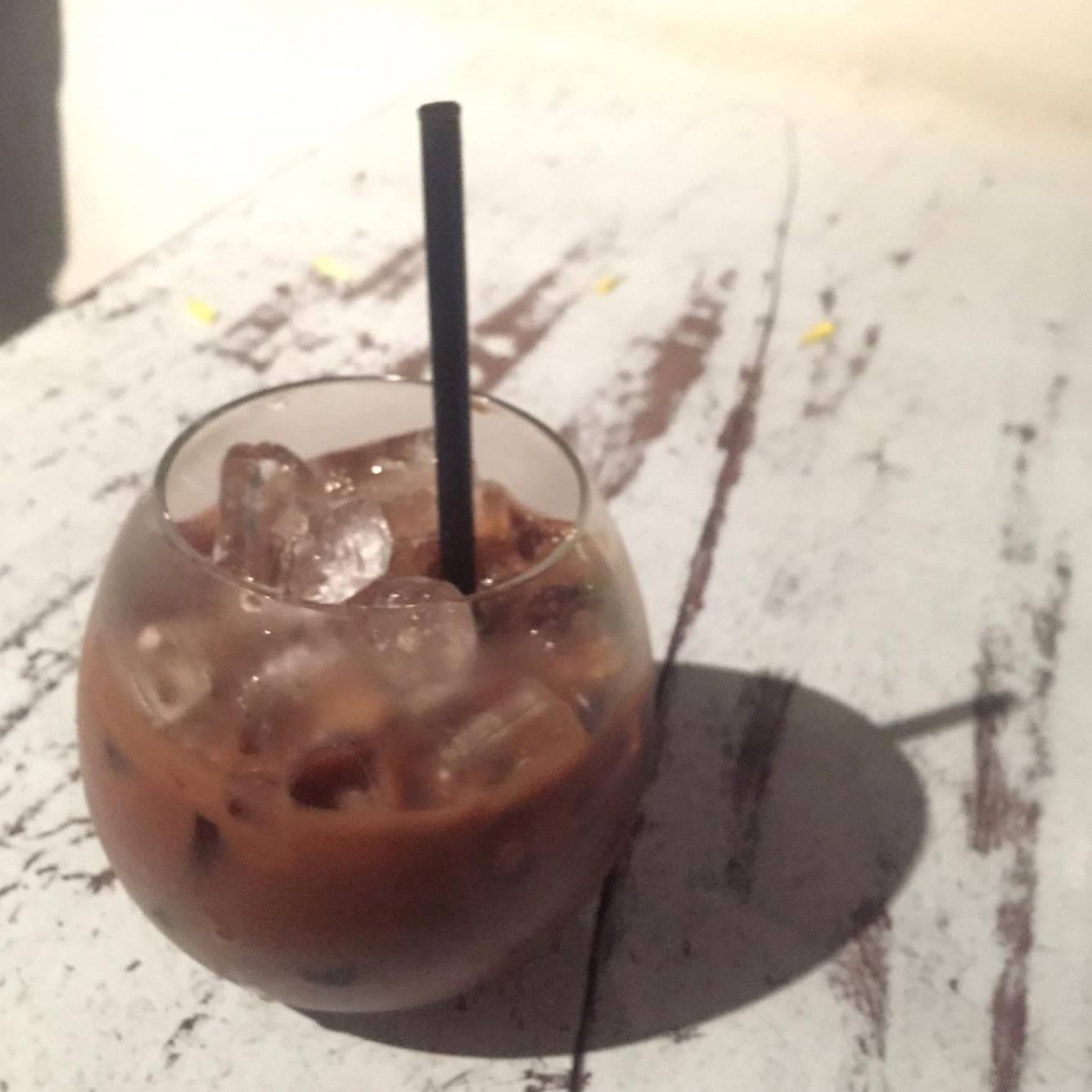 All in all, it was a lovely couple of hours, stories, fun, food and adventures. And it was the chance to meet a local young man with great dreams. It was an insight into local life, definitely not the usual visit to the tourist version of the city. And isn’t this really why we travel? To see life from another’s perspective?

If you get the chance to visit Ho Chi Minh City, we really recommend checking out this Street Food Tour.

If you want a taste of Vietnam without leaving Sydney, then you must join us on our Cabramatta Delights tour.